If you haven’t figured it out yet, I’m a pretty inconsistent updater. Keeping up to date across all of my social media platforms is frankly pretty exhausting but it also seems to have become a requirement for being relevant in the “art world.”

I understand that self-promotion is important when it comes to building your own business and apparently at least 627 people on Instagram want to see what I’m doing with my time, but I get caught up in my head a lot and totally forget to share my process.

A friend of mine recently shared this article by Mad Men creator Matthew Weiner on the struggles of “making it” as an artist. In it Weiner points out how artists have a tendency to hide their process, which in turn makes others who hope to follow in their footsteps frustrated when they face rejection early on.

In the article Weiner writes:

Artists frequently hide the steps that lead to their masterpieces. They want their work and their career to be shrouded in the mystery that it all came out at once. It’s called hiding the brushstrokes, and those who do it are doing a disservice to people who admire their work and seek to emulate them. If you don’t get to see the notes, the rewrites, and the steps, it’s easy to look at a finished product and be under the illusion that it just came pouring out of someone’s head like that. People who are young, or still struggling, can get easily discouraged, because they can’t do it like they thought it was done.

This really resonated with me because I’ve felt those same frustrations when I was starting out. After I graduated college I thought that all I had to do was find a studio space, start making work, and success would follow. But after countless rejection emails and slow sales, I started to feel really discouraged and would constantly doubt my work and my abilities as an artist. That self-doubt nearly crushed my dreams completely more than a few times but part of what allowed me to hold out hope for the future was in seeing other artists talk about their process and their own creative struggles.

That’s just my long-winded way of saying I want to make a more concerted effort to share my work and my experience as an artist, and keeping up with this blog that I totally haven’t been keeping up with is a good way to do that.

This week in the studio I’ve been working on trying out some new ideas, as well as revisiting some older forms.

A couple of weeks ago a friend of mine asked me to make her one of my spider teapots, like this guy:

I started making these “creature” pots as part of my BFA senior thesis show. My concept for those works was a lifecycle, from brith to death.

I learned a lot while working through the problems of that project, and as much as I enjoyed making those pieces, I didn’t necessarily just want to be “that chick that puts spider legs on teapots” and eventually moved onto different ideas.

But, for some reason, that picture of the pastel spider teapot just won’t stop popping up in my online feed. It’s by far my most popular post on Tumblr and at the time I’m writing this post has 71, 665 notes. I appreciate the positive attention but at the same time I feel disappointed that my older work that I’m no longer making is being praised while my work that I make now isn’t. More than that, after I graduated I felt like I had put myself into a creative corner with teapots with creepy legs and decided I wanted to try something different.

Part of me didn’t really want to make another spider leg teapot but I really like my friend and thought it might be a nice change from cranking out more mugs.

I took this opportunity to try out the spiders in Cassius, too. I had spent a long time and did a lot of trial and error trying to figure out the problems of sticking legs on pots and having them stand so I wanted to change it up to try and keep the project interesting.

And, to be honest, I really did enjoy coming back to the project. Making the pieces when I was in school was frustrating and slow because I had to find the best practices to make the pots structurally sound but this time around I could build on the experiments that came before. Since the first pot I made I’ve learned that carving into the teapot a little before scoring and slipping that pieces made for a better connection. I found that I had to leave the legs to dry just the right amount before putting them on to prevent cracking. And I found that putting wax resist around the joints before the clay dries out stopped the piece from drying unevenly.

I haven’t bisque fired these guys yet but I’m hoping that by making the pots smaller and the legs a little stronger they might be functional.

(For the record, I’ve never tried filling the previous teapots with water before but I’m pretty sure the weight would be too much for the legs).

I’m excited to see how they turn out, though. I have some ideas for glazing, too, but I’m getting ahead of myself. First they have to survive the firing.

I’ve also been doing some more experiments with new designs for my production work.

I wanted to try out different ways of incorporating simple carved designs into the mugs. From the last round of work I felt the “Mountain Peaks” carved design was most effective, featuring carving along the foot of the piece that extends up the side of the mug.

Last week I made a few sets of espresso and latte cups and saucers and decided to include the same carved motif on both. After I carved it I was thinking that the design looked similar to the red sun motif of the New Mexico flag when it was in a circle like that. 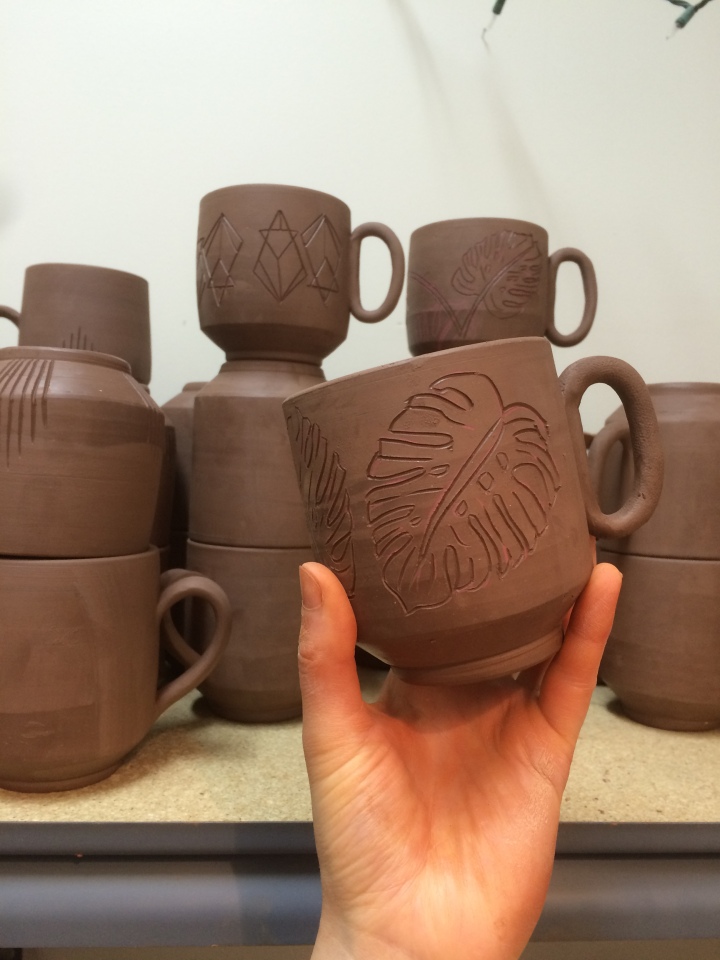 I experimented a little more with new, more organic carved designs, like the monstera leaf. I was also feeling like my handles were getting a little stale and wanted to try out some different styles. I think this thinner, more rounded handle works better with the overall piece by mimicking the form of the carved designs.

And, for fun, I tried out some crazy handles.

I don’t know if they’ll turn out well (or even make it through the drying process) but it was a nice change from the standard pulled handles I was doing before.

Last week’s studio time involved a lot of experimenting and trying out some new ideas, which is always kind of a luxury. I worry a lot about how I’m going to make a profit from my art so that I can eventually support myself so it’s nice to focus on just playing around with clay sometimes.

I’ll try to keep up on showing my brushstrokes in the future, too. It’s nice to talk about what’s going on in my head sometimes, even if it’s just into the abyss of the internet.

Check out my tunes for the studio this week, too! Good jams for your weekend!