Since I’ve moved to California succulents have become a fascination of mine. I had tried growing them when I lived on the East coast but they always ended up meeting an untimely demise. They were always too cold or under/overwatered and tended to dry up after a month.

But they love it here in California. You can see succulents growing wild along the highway or popping up in patches of dirt along the sidewalk. They’re incredibly hearty and I’ve always been impressed by a plant that’s able to grow in a climate as inhospitable as the desert.

I had never been to a desert before a couple of years ago but I always thought of them as strange, alien landscapes. In my mind the desert of the Southwest is peaceful and quiet but also powerful. Despite a rising human population there are still large patches of desert lands that have managed to stave off urban sprawl and can be preserved in its natural state. Cacti and other desert plants are the marvel of life that was able to evolve to thrive in that climate and I think that’s a real testament to the power of plants.

This line of work is inspired by the desert landscape. All of the work is thrown from Navajo Wheel, which has been a really interesting clay to work with. For the most part it’s smooth and really easy to work with, with just the right amount of grog. It does stain the heel of my palms red sometimes, though.

(Pro-tip though, they also make a version of Navajo Wheel with more sand in it for sculpture. I wouldn’t recommend throwing with it though, I bought a bag by accident once and it fucked up my hands.) 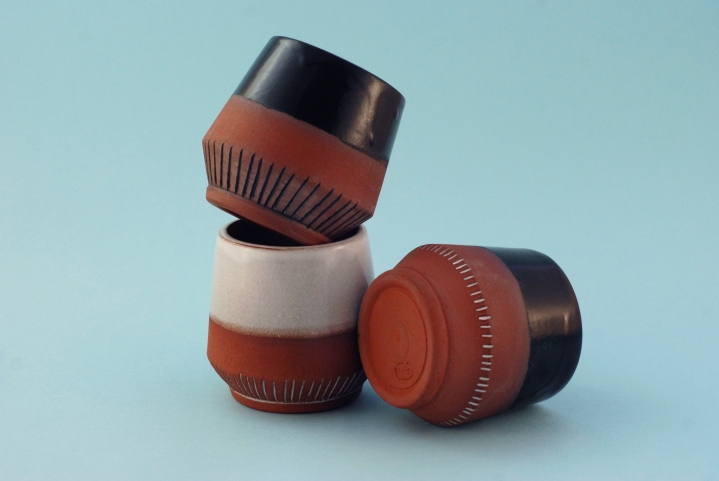 Incorporating the raw texture of the clay was also an important element I wanted to feature. When I was starting out in my ceramics career I feel like I was conditioned to want to cover as much of the clay’s surface with glaze as I could. Early on I was working mostly with white stoneware and I preferred a clean, glossy texture to the buff off-white the clay fired to. I chose this clay, like the Cassius, because of its raw texture and color and it felt like I was hiding such an important part of the piece if I were to glaze the whole thing.

As a ceramic artist making functional work I always try to keep the experience in mind. I consider a lot of tiny factors that all add up to the whole of the piece: How does the shape of the lip or the weight of the handle feel when you’re drinking? What textures do I feel when I pick it up to take a sip? I have one of my carved Cassius mugs that I use for my morning coffee and I enjoy feeling the roughness of it in my hand. The texture is almost like slate and I like the feeling of running my fingertips over the carved details as I marinate in caffeine. I wanted to get the same experience with these cups; an interesting rough texture to balance out the smoothness of the glaze.

The subtle carving along the foot of the cup gives the cup added texture, as well as a nice simple repeating design to unify the overall collection.

While working on this collection I was listening to a podcast on Maurice Noble and Chuck Jones who were the creative minds behind many of Warner Brothers’ best loved cartoons. Noble revolutionized the art of the background in animation and created some of the most influential works of his time, including the desert landscapes of the roadrunner cartoons. Taking inspiration from his work (especially for that promotional animation) I wanted to create a simple silhouette landscape for the mugs.

To create the design I painted it in wax and allowed the glaze to fill in the rest of the piece, mimicking the sky. Each landscape is done freehand so each little desert has its own personality.

Like the tumblers I wanted to expose parts of the raw clay’s texture to create a sandy red landscape. The stark contrast between the simple monochromatic color palette and the roughness of the clay body makes the design more striking and interesting. 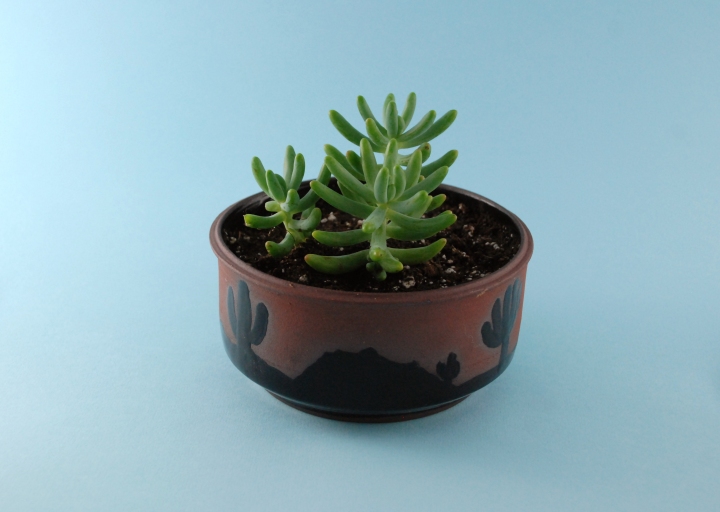 Select items from the collection can also be found in stores from Succulence in San Francisco.

One thought on “Desert Winter”